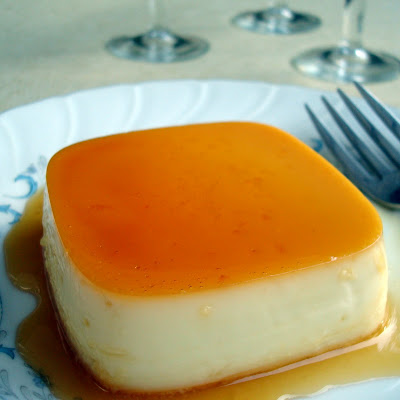 I've never really been a big fan of flan. I enjoyed other types of custard, and cream-based desserts, but flan's typical eggy flavor and  jello-ish consistency are a little troubling to me. Also the name doesn't sound very appetizing. "Flan" sort of staggers off your tongue and lands with a splat! Of course you could call it Creme Caramel, which is essentially the same thing. But people tend to be more familiar with the term "flan" and I hate to cause confusion.

One evening, The hubs and I went out on a dinner date with some friends to a new, up-scale Latin restaurant in town called Curras. We had a lovely dinner of braised lamb chops and perfectly stuffed poblano peppers, swimming in a pool of creamy mole'. The food, company, and conversation were delightful, leaving the promise of dessert as the only thing that could improve upon the evening. I think there were several desserts on the menu (not certain because we now always order the same thing), but the items our waiter unabashedly promoted were the Tres Leches Cake and the Flan. He was so convinced we would not be disappointed with the flan, that I felt it was time to give it a second chance. Second chances are a beautiful thing, you know.

We ordered one of each to share between the four of us. Trying to be open-minded, I resolved to hope that maybe my taste buds had developed even further, or maybe I'd suddenly enjoy eggy desserts. I waited in anticipation as the waiter set the small plates between us. At first bite, I knew...this was no ordinary flan. Light and creamy, mellow and smooth. Not heavy, jello-y or eggy at all! The caramel sauce was light as well, without the singed aftertaste that caramel can acquire when one is not careful. Incredible.

The Tres Leches cake was also quite remarkable, but not life-altering like the flan. I was instantly a flan-fanatic, a FLANATIC! In fact, I'm a little embarrassed to say, I have woken up in the middle of the night--on several occasions--craving that flan! What's that about? What could they possibly put in it, that would make you arise from deep slumber in search of flan??? I don't know, but I HAD to learn to make it!

So, as I like to research these sort of things, I set off to find the very best flan recipe. I collected several online recipes that were highly praised, and one out of my most reliable cookbook, Cook's Illustrated "The Best Recipe"

. I laid them out in front of me, reading glasses at the tip of my nose, and studied. Yes, I AM a proud kitchen-nerd, and unashamed to say I even used a highlighter during this process!

You get the idea...if you've GOT to figure something out, it takes this kind of perseverance! I discovered that extra yolks improve the texture and taste. The whites create it the egginess! Also the cream cheese gives the flavor a little punch. After multiple trails I have a flan recipe that is close to the one that first struck my heart and taste buds.

I'm not throwing you a quickie dessert for spontaneous dinner partings--flan takes time! But if you are serious about creamy desserts...custard, pudding, panna cotta, creme brulee, flan...this one is worth your effort!

If you wish to succeed in life, make perseverance your bosom friend, experience your wise counselor, caution your elder brother, and hope your guardian genius. -Joseph Addison

Preheat the oven to 360*. Set out 6-8 OVENPROOF custard cups

, soup cups, or large ramekins that will hold at least 6 oz. each. Add the sugar, water and lemon juice to a sauce pan and place over medium-high heat. Allow it to come to a light boil and reduce the heat to simmer. 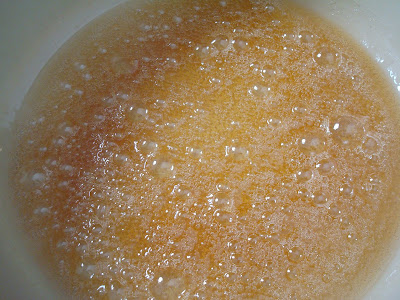 Place the evaporated milk in a small sauce pan over medium heat. Add the lavender to the milk and allow it to come to a simmer. Simmer the milk one minute, then turn the heat off and let the lavender steep in the milk until ready to use. 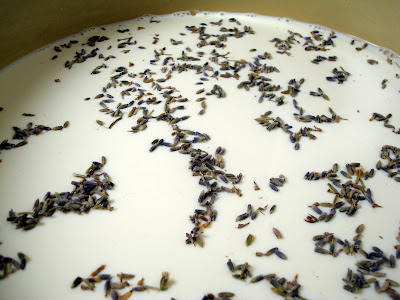 Meanwhile, watch the caramel! Once the color starts to change, it goes fast. Allow it to bubble until it is a light to medium brown. Quickly pour an equal amount of liquid caramel in each cup. Be very careful—hot sugar can cause serious burns! The caramel will harden up almost instantly. 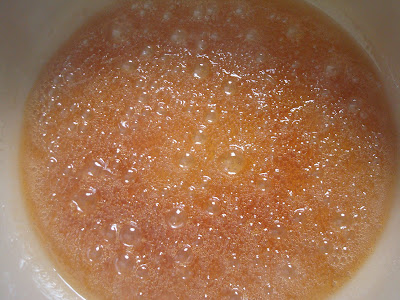 Using an electric mixer with a whisk attachment

, whisk the cream cheese until it’s light and fluffy. You may want to warm it in the microwave for just a few seconds to make sure it’s really soft. With the mixer still running, add one egg at a time, to allow the mixture to fluff up as much as possible. Now add the vanilla and salt. Then with the mixer continually running, slowly pour in the sweetened condensed milk and the evaporated milk with lavender. Whisk until smooth. 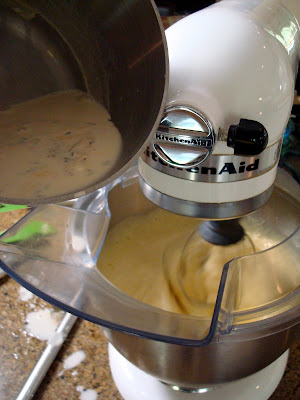 Set the custard cups in a larger baking pan, lined with a clean dish towel. Fill the pot used for the caramel with water. Bring to a boil. 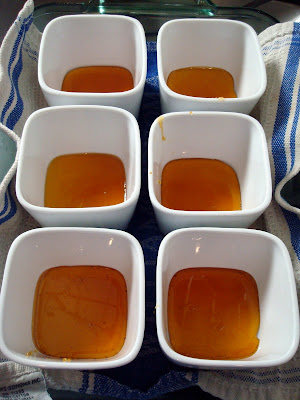 to strain the lavender and any clumps out of the flan mixture. (You could leave the lavender in if you don’t mind the texture.) Then pour the mixture equally into each cup. Carefully fill the large pan with boiling water until it comes half way up the sides of the custard cups. Cover the whole pan, loosely with foil. 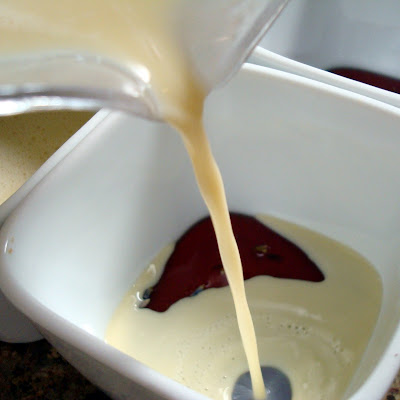 Bake for 40-70 minutes. The cook time depends heavily on the size and depth of your custard cups. Check at 40 minutes, then add 10 minute increments until done. The flan is done when a knife inserted in the middle comes out clean. 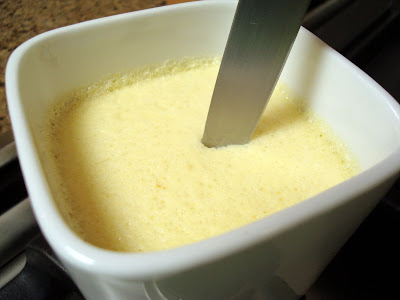 Cool them to room temperature, then cover with plastic and refrigerate until ready to serve.

To serve- Run a paring knife around the edges of each flan cup. Cover with an inverted dessert plate and flip. Give it one good shake if necessary. The flan should come out with a light caramel sauce over the top! Serve alone or with berries. Serve 6-8. 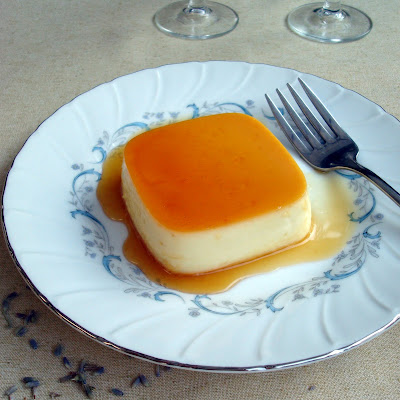 Any kitchen-taught lessons in perseverance you want to share? Click "comments" below and tell me all about it!
Posted by A SPICY PERSPECTIVE at 8:21 PM