People often ask me where I like to eat, as if I have some magical ability to find the best restaurants. Ok...maybe I do! You could call it my secret super-hero power. (Wink, wink!) Along with the galactic ability to pull a party together in moments, I have "flavor-sonar" for sniffing out the best food around.

My birthday was a couple of weeks ago. My husband wanted to know where we should have dinner, as if he had to ask. I simply replied, "You know where." For as many incredible independent restaurants Asheville has, there is ONE that I place on a pedestal, Curras Nuevo Cuisine.

Before I tell you why, let me expound on the food scene here. Asheville in recent years, has marketed itself as a "foodtopia society." A place where ALL culinary, dietary, and planet-friendly endeavors are celebrated. We have more locally-owned restaurants than most cities 10 times our size. AND THEY'RE GOOD! No, no...they are awesome! With so many choices of varied culinary styles and world flavors--not to mention a focus on local meats and produce--there is NEVER a reason to eat at a chain restaurant. Not only is Asheville rated a top 10 food destination by several renowned sources, it has also surpassed Portland, OR as "Beer City USA" (my husband likes that little fact!) We have a surplus of local edibles that are shipped world-wide, and host many food-related festivals each year. Asheville is a hoppin' little place for we foodies gourmands epicureans (I hate those terms.) GASTRONATORS! Someone please send me a better word! 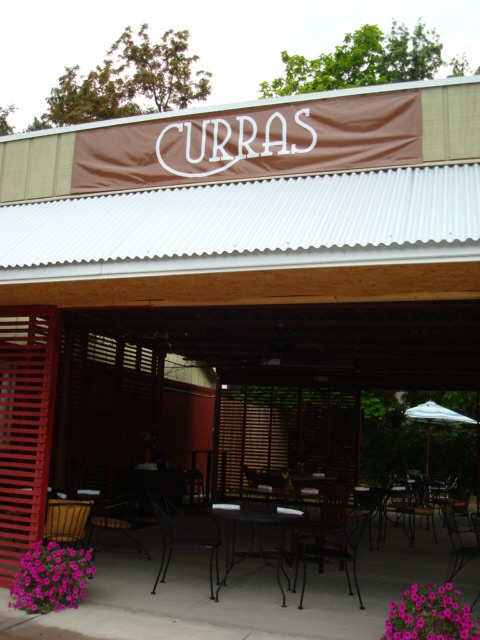 All this being said, Curras Nuevo Cuisine reigns supreme, in my mind, as the Asheville restaurant that has it all! Let me be clear, this is NOT a hoity-toity, make-a-reservation-months-in-advance, spend-your-whole-retirement-fund type of place. The ambiance is quaint and comfortable, not fussy. The presentation is artful, not overdone. Chef Tyler De Bruyne's menu is seasonal and well thought out; a delightful blend of bold Latin flavors and fresh local ingredients. Some of my favorite dishes include the stuffed poblanos, the airy tres leches cake, and the ultra creamy flan. And let's not forget the sauces, dear me, the sauces! ........Sorry, I just lapsed into a zen-like state. Moles, Chile-infusions, out-of-the-box salsas and relishes...... Whoops, almost happened again! Let's just say I would happily to go to Curras and just drink sauce! 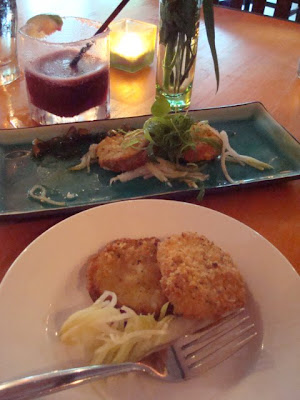 For my birthday, we started with Fried Green Tomatillos and Goat Cheese with Candied Anaheim Chile Relish. I ordered the nightly special of Seared Tripletail over Heirloom Tomatoes with Pineapple Salsa topped with a Stuffed Squash Blossom. The hubs had Adobo Grilled Pork with Esquite Stuffed Sweet Roasted Onions. It's hard to say whose was better. Sadly, my restaurant photos didn't turn out well after the sun went down! I hadn't prepared to make a post of the night. So I don't have good photos of the restaurant's dishes! 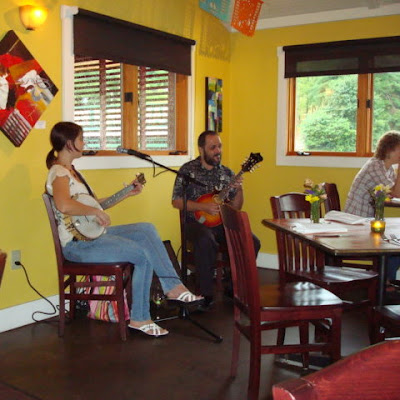 The owner Marco Garcia, a veteran restaurateur in Austin, Texas and Florida, was gracious enough to share the recipe for the Adobo Grilled Pork. As I prepared this recipe at home, I made a few slight changes. 1. I altered the quantity, as I'm sure you don't need 3 lbs. of Adobo Sauce in your fridge! 2. I made little method adjustments to accommodate home cooks who don't have industrial equipment. That's it! It turned out just as lovely as we remembered it.

Thank you Marco and Chef Tyler. You made my birthday very special indeed! 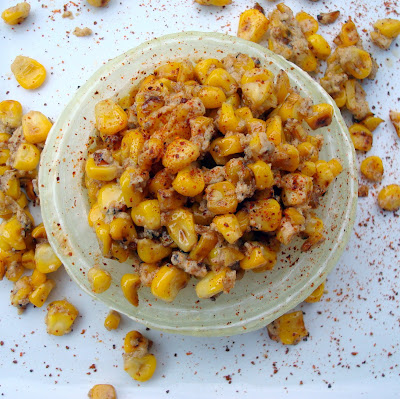 Toast the peppers in a skillet or on a griddle until aromatic, but do not burn. Remove the stems and shake out the seeds. 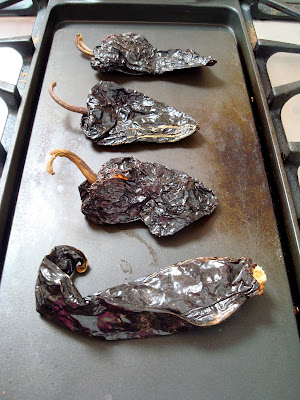 Heat 1 cup of orange juice in a sauce pot. Add the garlic, cinnamon stick and bay leaves to soften. Once the orange juice is very hot, add the chiles and remove from heat. Allow the chiles to soak in the juice until they are soft—10 minutes. 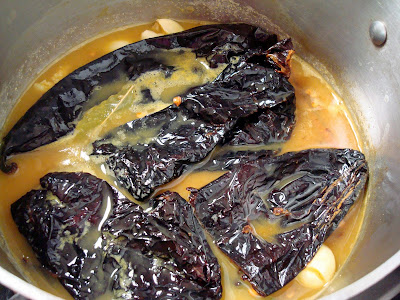 Pour the contents of the pot into a food processor 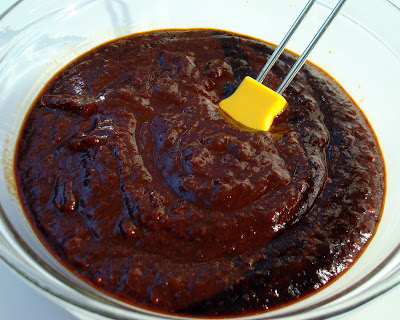 Heat the grill to medium. Brush the adobo sauce onto the pork loins, salt well, and set aside. Cut two onions in half, then slice off the stump on either end. 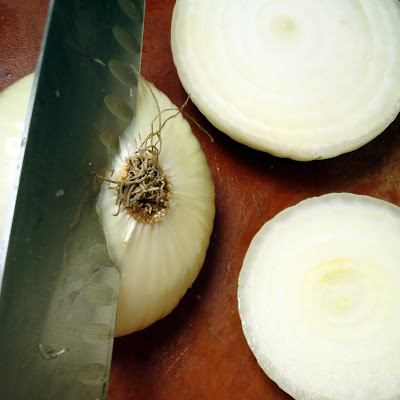 Grill the pork for 15 minutes, turning every five minutes. Remove from heat and tent with foil for 5-10 minutes before slicing. Grill the onions for 10-12 minutes until soft. 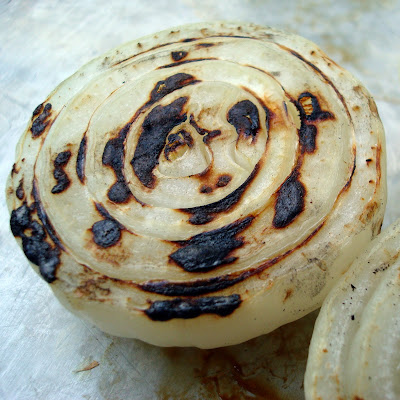 Meanwhile, Cut the corn off the cobs and place it in a skillet over medium heat. 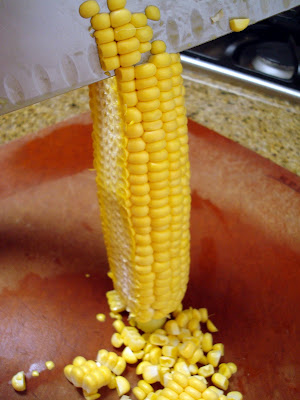 Saute the corn until it is popping and almost dehydrated—about 10 minutes. Then lower the heat and add the butter and goat cheese. Stir the cheese until melted. Stir in the paprika, salt and pepper to taste. Drizzle with a little lime juice at the very end. 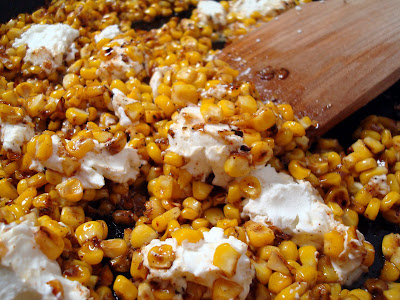 To plate: Slice the pork in ¼- ½ slices on the bias. Push the center sections out of each onion half (reserving for another dish) leaving only 2-3 rings. Fill the onion “cups” with the exsquite corn. Fan out the pork slices on a plate and set an onion cup next to it. For a cool plating effect, brush a little of the extra adobo sauce around the edge of each plate. Heat the oven to 400 degrees F then turn it off. Place the plates in the oven for 5-10 minutes to allow the sauce to dry! Allow the plates to cool before serving! 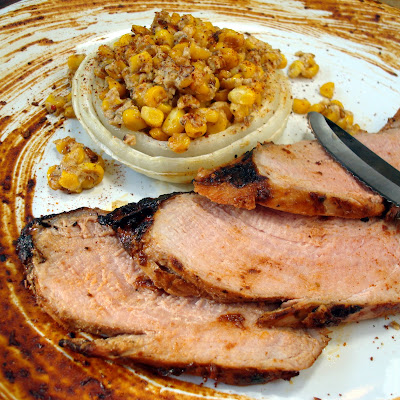 Curras serves this dish with roasted asparagus, if you want a veggie! 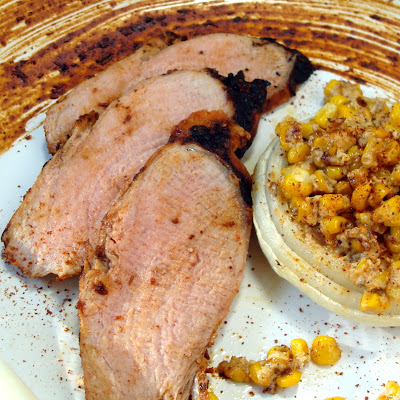 Posted by A SPICY PERSPECTIVE at 8:41 PM