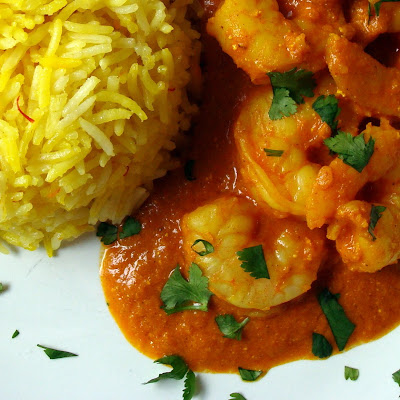 I can tell immediately that this post is going to turn into several posts over the next few months. I spent three summers in India, ages 14, 19 and 20. Although my time their was quite a while ago and the memories have blurred, there are plenty of moments still quite distinct in my mind. As I sit down to write them out, I'm flooded with a book's worth of thoughts to share. I'll try to pare back to one or two for this post.

My second trip we stayed in a rural village. This experience involved lots of snakes, hitchhiking to the next village on the back of a work truck (no taxis or rickshaws) to go to the market, and digging our own potty, then setting up grass mats around it for privacy. The villagers thought that was hilarious!

One evening we were walking back to our shelter when it started to rain. At first it was a light rain, then the monsoons moved in. We had a little over a mile to walk with no signs of the rain letting up, so we trudged forward. The uneven dirt road was turning to mud. We tried to stay on the higher areas, jumping from one bump to another when necessary. Ahead was a river, of sorts, flowing across the road, so I started looking for a series of bumps and high ground to cross over. We jumped across several mounds, when I looked down and saw something move. It appeared to be a lobster...in central India? I moved a little forward to get a better look and discovered the largest scorpion I have ever seen, or heard of for that matter. We were in a hurry to get home, but we all had to stop, and stare in wonder at this massive creature. The largest recorded scorpion is 9 inches long. I promise you, the one my friends and I saw that day, stranded on a dirt mound, was at least that big...emphasis on AT LEAST. Fierce and poised, ready to strike, I know he was as mortified as we were! Clearly, we chose another mound to cross the watery road and headed home with his image forever etched in our minds.

Village life meant cooking our own meals from our street-market findings. We experimented with different unknown grains, rice, veggies and legumes. We ate lots of fresh eggs. The village we lived in was primarily made up of a caste that was vegetarian, so meat was hard to come by. We made friends with the local school teacher, Shanti, and she offered to teach us how to prepare several dishes. Shanti and her sister road up on their moped. She had a look around the quarters--an old rundown building with no plumbing or electricity--then set off to find three rocks of equal size. She placed the three basketball-sized rocks in a triangle, then piled sticks in between and topped the rocks with a large kettle. I was utterly amazed! We had been cooking on a tiny camping stove for a month. Let me not forget to mention...Shanti brought meat! Lamb. Mutton actually, or old sheep as she called it.

That was the day I learned about curries. Really learned, not just ordered or tasted, but understood. Curries take time, patience, and focus. A myriad of fragrant spices, carefully layered at different times, slow-cooked for hours. We tended the curry and talked all throughout the afternoon. At 19, I had no idea "curry" wasn't it's own spice! Curry powder, as we know it, is simply a blend of popular Asian spices used in India. Shanti also informed me that India cuisine has a certain methodology, not so different from that of french cuisine. There are absolutes. Rules to be followed...rights and wrongs. Many dishes have been prepared the same way for hundreds, and in some cases thousands of years. To change them is a travesty! 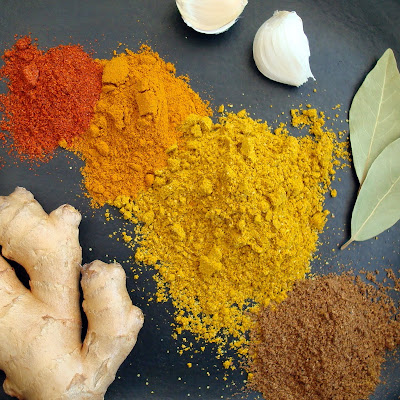 Shanti taught us to make a Northern dish called Rogan Josht. A spicy, creamy, tomato based curry with bite-size morsels of tender lamb (mutton) and yogurt. I have worked hard to replicate her dish at home and have made it many times. But I've also done something else...here comes the sacrilege!

Lamb Rogan Josht is amazing, but it takes TIME and meticulous attention--something I don't always have when cooking dinner at the end of a long day--with kids whirling around the kitchen! I have, against better judgment, tinkered with my best Rogan Josht recipe to make a "quickie" version. This curry is for nights when you crave Indian food, but don't get home until 6 pm or later. You could actually walk in the house at 6, change into your comfy clothes, and have dinner ready shortly before 7 pm! Is it Shanti's Rogan Josht? No, But it's PRETTY DARN GOOD!

The first thing I had to do was change the protein. Lamb just takes so long to get that tender, fall-apart texture. So I use chicken breast, or in this case shrimp. The second thing I did is add the spices at once instead of layering them; I've had to alter the measurements a bit. Third, I simmer them in less water over a shorter amount of time. Let me repeat, this is NOT an authentic recipe, but I truly think you will be pleased with the results! My family loves it and the kids actually prefer the shrimp to lamb.

I'll never forget the day I learned about REAL Indian cooking. And I pray for forgiveness when I make my quickie recipe! 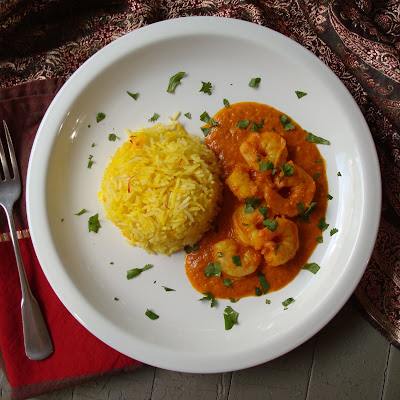 *Some of these spices sound unfamiliar, but can be found in most large supermarkets!

Place a large pot over medium heat. Add the onions, sauté for 3 minutes. Then add all the dried spices and stir into the onions. “Toasting” the spices opens up the flavors faster! Next add the ginger and garlic—sauté another 1-2 minutes. 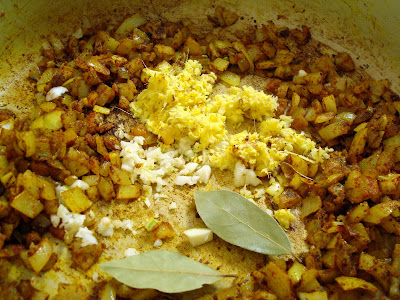 Add the tomato puree, 1 ½ tsp. salt, and water. Stir in the yogurt. Simmer for 20-25 minutes—while you are cooking the rice. 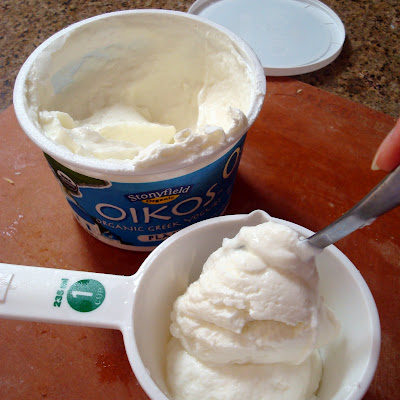 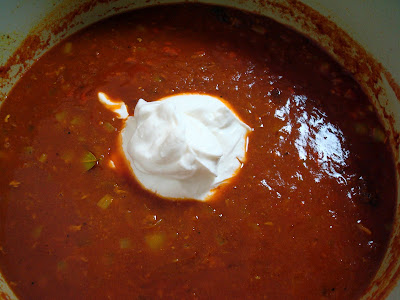 Set a smaller pot over high heat. Add 1-2 Tb. of oil and the dried rice. Sear the rice for 1-2 minutes, stirring to coat it in oil. Add the water (usually 3 cups, but check package) and cover to bring to a boil. Once boiling, stir, add a pinch of saffron and a large pinch of salt, then cover and lower heat to simmer. Simmer for about 15 minutes, then remove from heat but keep covered until ready to serve. 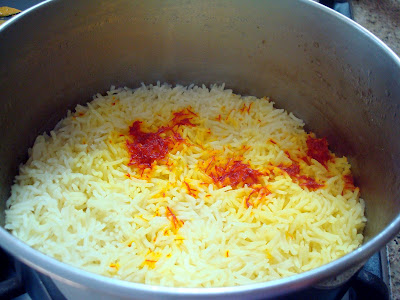 Once the rice is ready, remove the bay leaves. Use an immersion blender to puree the curry. This is an optional step I like to take to improve the texture! 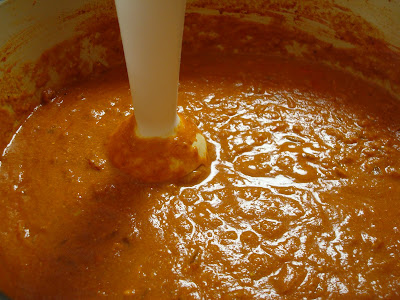 Add the shrimp to the curry pot. Stir them in and allow them to cook for 3-5 minutes—until pink. Taste for salt. Serve the Rogan Josht over the saffron rice, with some naan on the side! 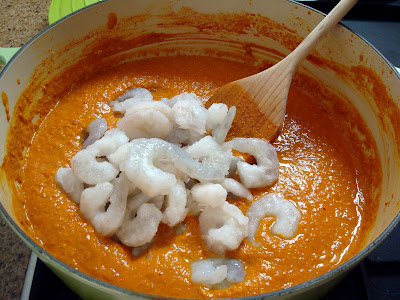 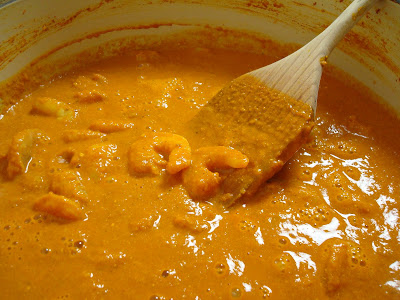 Serves 4-6.
*Madras curry powder has some heat to it! If you are sensitive to spicy foods, omit and extra cayenne. 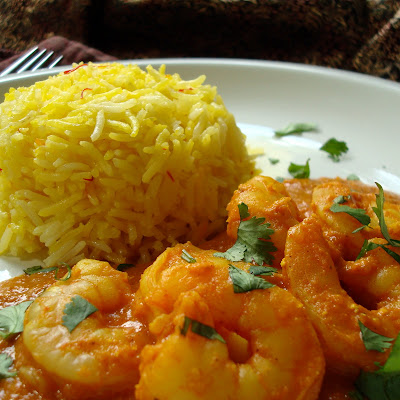 Posted by A SPICY PERSPECTIVE at 8:55 PM