There are times in life when one craves a sandwich. More than just a craving or even a hankering...a deeply-rooted GUTTURAL urge for a sloppy, meaty, two-handed, got-to-SQUEEZE-to-fit-in-your-mouth kind of sandwich. A man's sandwich...the likes of which we girls shy away from in fear of muffin top or judging eyes. I had that kind of hunger this week. I can say that without any shame.

Luckily, I have the cure for such a ravenous appetite. It's called a muffaletta. 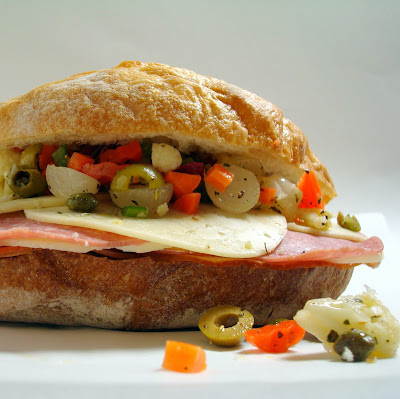 Muffalettas are a New Orleans creation. A large double meat, double cheese sandwich with the mother of all sauces on top. Actually, it's not a sauce at all; it's an olive salad that is dumped over top the generously piled deli favorites, then covered with bread in hopes it will stay on. The name "muffaletta" comes from the style of Italian loaf used, and there is quite a discrepancy in how it is pronounced! Some say Moo-full-otta or Moof-oo-letta...I say Muff-all-etta...you be the judge. 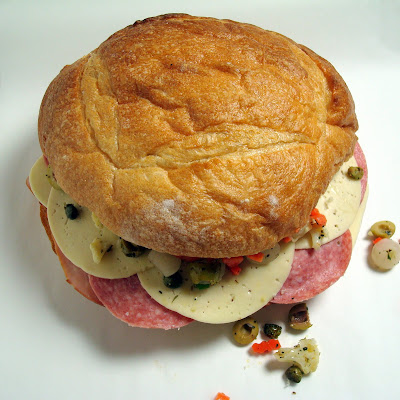 I have seen muffalettas with a tidy tapenade, minced until almost obliterated, as to spread it across the bread. I have no intentions of offending these sandwich makers, but I think they are missing the point. Muffalettas are BIG sandwiches, and big sandwiches are meant to be messy. In fact, part of the fun is using your fingers to eat all the runaways that fall onto your plate! Therefore, I say make a CHUNKY olive salad, with pieces large enough for a half-blind granny to identify!

As we ate muffalettas this week, my non-olive eating five year-old son said, "What's in this that makes it soooo good?" You could see the olives hanging out of his sandwich and all over his plate, but he didn't care. Something about a muffaletta makes you through caution to the wind, and open wide for an enormous bite!

I try to select a giardiniera that is prominatly red peppers and cauliflower.  Also, select a round italian loaf with a dense texture. Soft french loaves won't hold up to the weight of the filling! 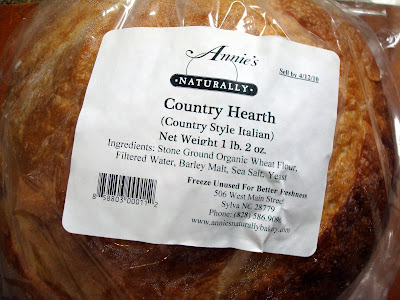 For the olive salad, drain all jars and add to a medium bowl. Don't forget to roughly chop the cocktail onions, giardiniera mix and banana peppers! Add the rest of the ingredients and mix well. Set aside while preparing the rest of the sandwich—the longer it sits—the better! 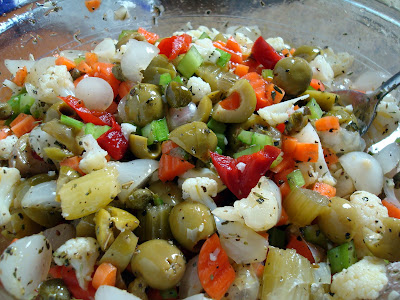 Slice the loaf of bread in half to make a top and bottom of the sandwich. Hollow out some of the bread so it won’t be too tall to fit in your mouth! 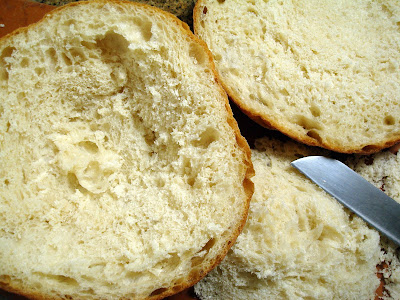 Drizzle some of the olive salad juice on the bottom half of the loaf. 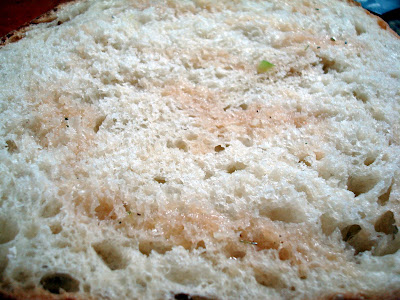 Layer the ham, provolone, salami and swiss on the sandwich. 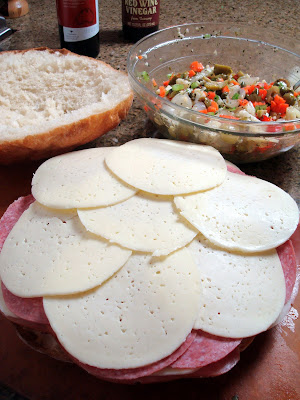 Top the meats and cheeses with a generous portion of olive salad and add the bread top. OR lively adventurously--fill the hollowed-out bread top with salad, place the bottom half over it, and FLIP! Cut into pieces and serve! 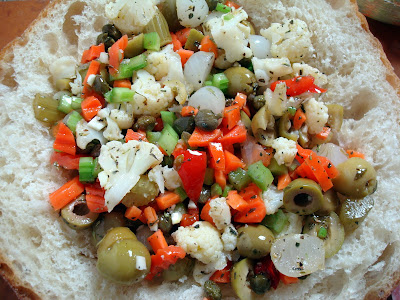 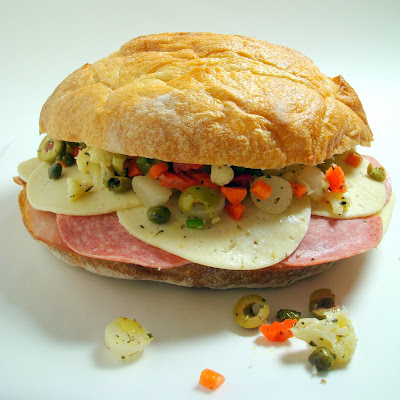 *The olive salad will make twice as much as you need for one big sandwich. You can either make two sandwiches and serve more guests, or save the rest for later. It’s great as a green salad topper or with an antipasto platter. I just like to make a large batch, rather than have extra half-empty jar in the fridge!

Posted by A SPICY PERSPECTIVE at 6:55 PM